Treasure of the Wumpus

In days long past (the 1970s), the Wumpus, a terrible creature lived in a cavernous lair of narrow corridors, forgotten chambers, pits of slime (that waited to claim explorers), monstrous bats (which could carry explorers randomly through the lair), and the terrible Wumpus, who slumbered in the darkness and meant instant death.

Many came to hunt the Wumpus, mindful of the visual cues which indicated safety from peril.  However, the Wumpus escaped and hid his treasure throughout a land of infinite darkness.  To protect his treasure he set traps of spring loaded platforms to propel explorers randomly in the darkness and land mines to blow them to kingdom come.  It is said that those with nerves of steel and a keen ear might navigate this land of darkness, collect the treasure, and emerge into the light with the Treasure of the Wumpus!

From smart phones to the Internet, so much of today’s society focuses on the visual and our response to it. While advances in audio technology have made surround sound ubiquitous in TV, movies, and video games it is often relegated to a supporting role – creating a texture and context while taking a second seat to the visuals.

The Treasure of the Wumpus is a game without visuals.  Players are placed in a light proof enclosed pod (The Azimuth Cave), given a navigational controller, and are asked to navigate the land of darkness to collect treasure and avoid traps simply by using the surround sound aural cues.  Trapped in a maze without walls, players must move slowly, and listen carefully as our aural memory is not as sharp as our visual.

For the audience watching from outside there are two displays.  One shows the map and the players location, while other shows an infrared view of the player’s face from inside the Azimuth Cave affording the audience a taste of their reactions. 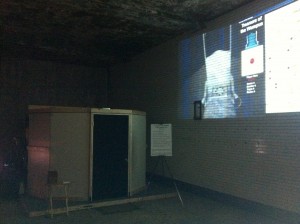